Tourmaline is a group of complex boron cyclosilicate minerals compounded with aluminum, iron, magnesium, lithium, sodium or potasium ((Ca,K,Na)(Al,Fe,Li,Mg,Mn)3(Al,Cr,Fe,V)6(BO3)(SiO3)6(OH,F)4). They all have the same crystal structure, but with a different complex mixture of other elements, resulting in different chemical and physical properties. Tourmaline's main species include:

Tourmaline comes in virtually all colors of the visible spectrum. These gems have one of the widest color ranges of any gem species, ranging from colorless to black.

Its name is said to come from the Sinhalese word toramalli, meaning stone with many colors. 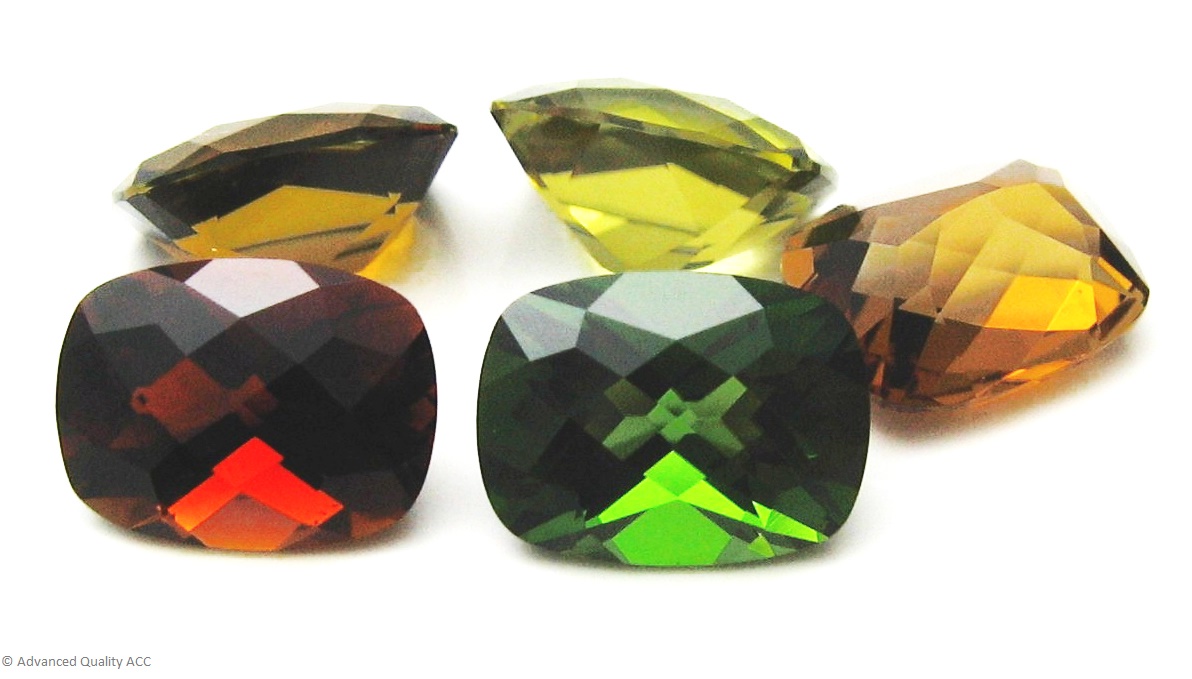 Legend has it that tourmaline travelled along a rainbow when journeying up from the center of the earth and thus assumed all of its colors.
Tourmaline is the birthstone for the month of October and the gemstone representing the eighth wedding anniversary.

It promotes self-confidence, inspires creativity and attracts compassion, tolerance and prosperity. Tourmaline enhances balance between body and mind. It is believed to protect the wearer against bad decisions, dangers, and misfortune. It is the gemstone of love and of friendship, rendering them firm and long-lasting. 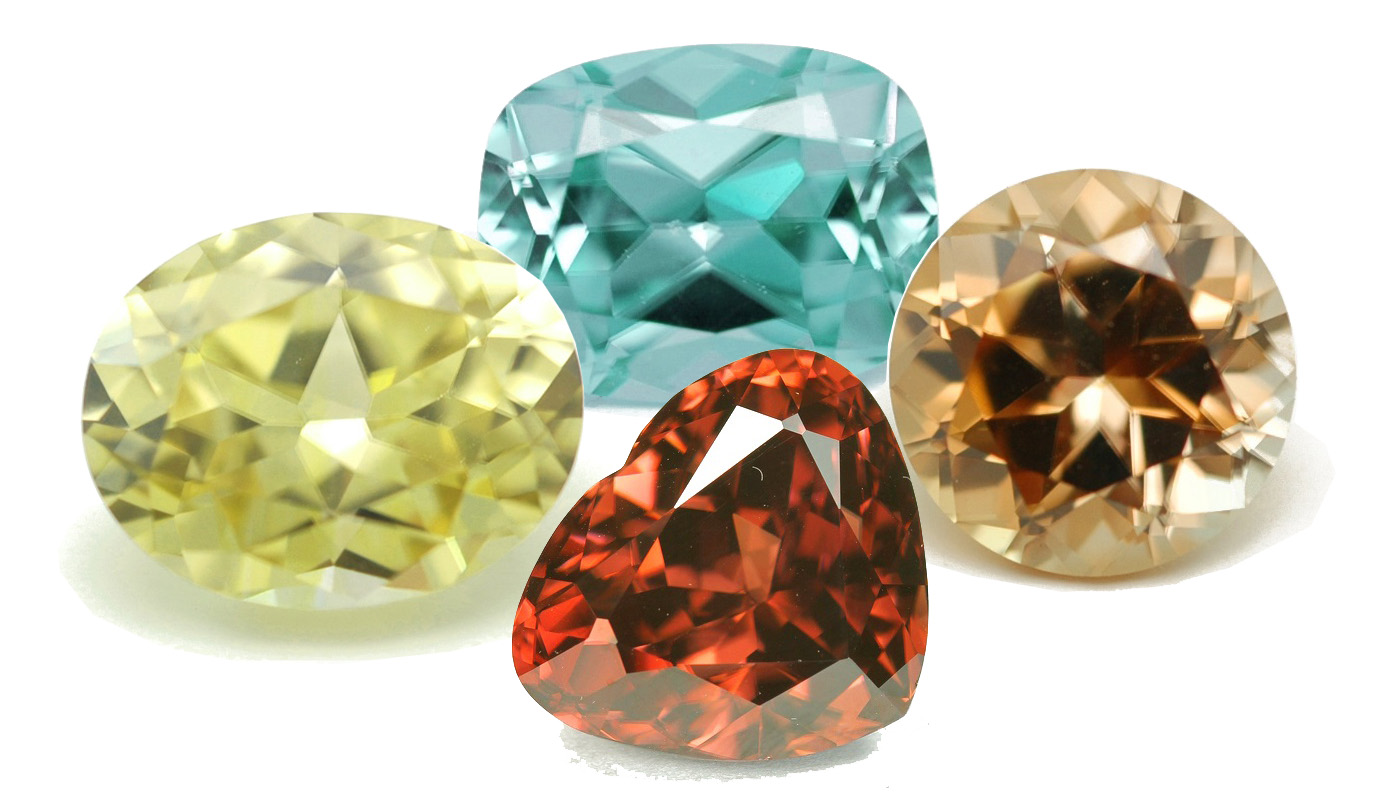 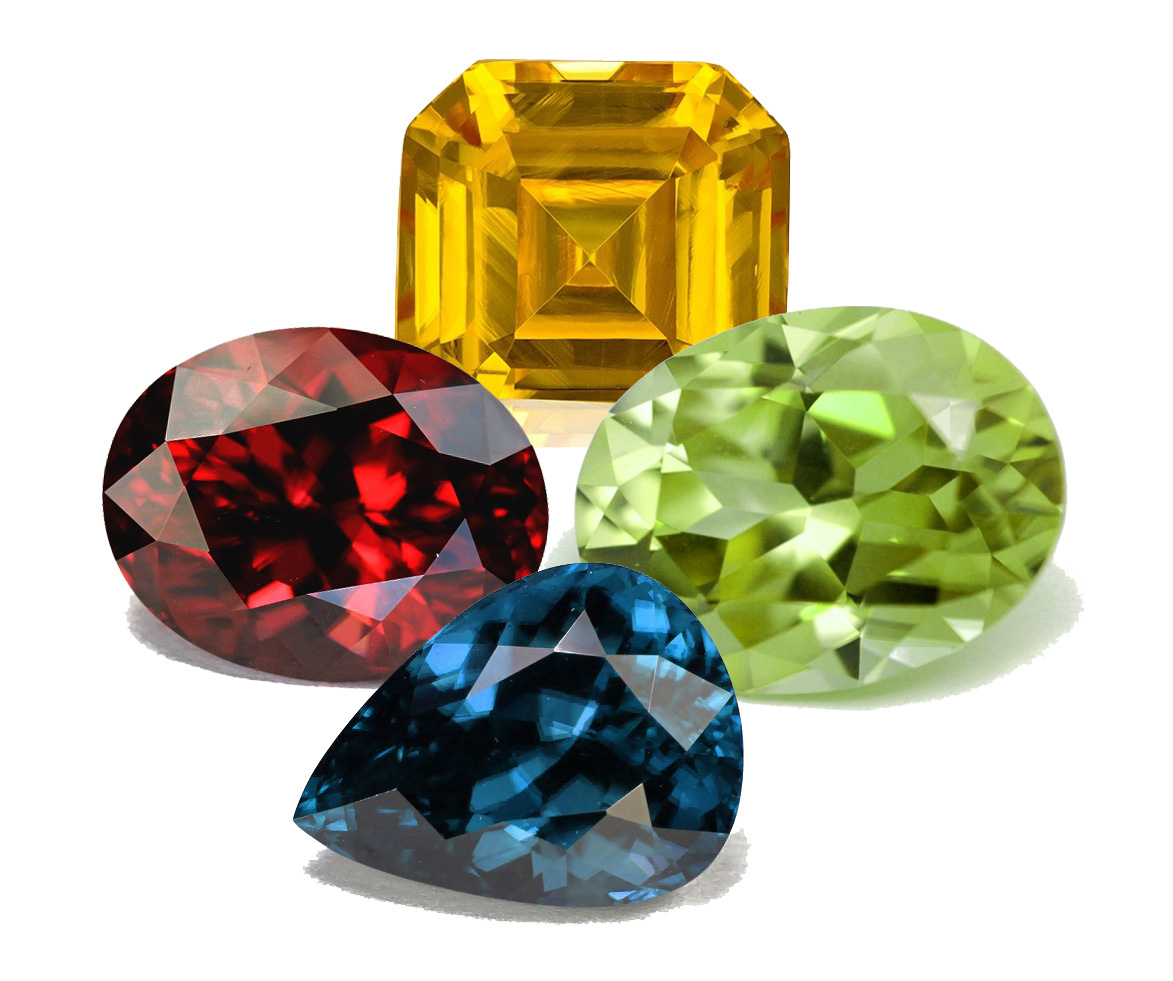 Tourmalines are normally traded not according to their species but rather under varieties of color-specific trade names. Each variety comes with its own set of grading rulers and pricelists. 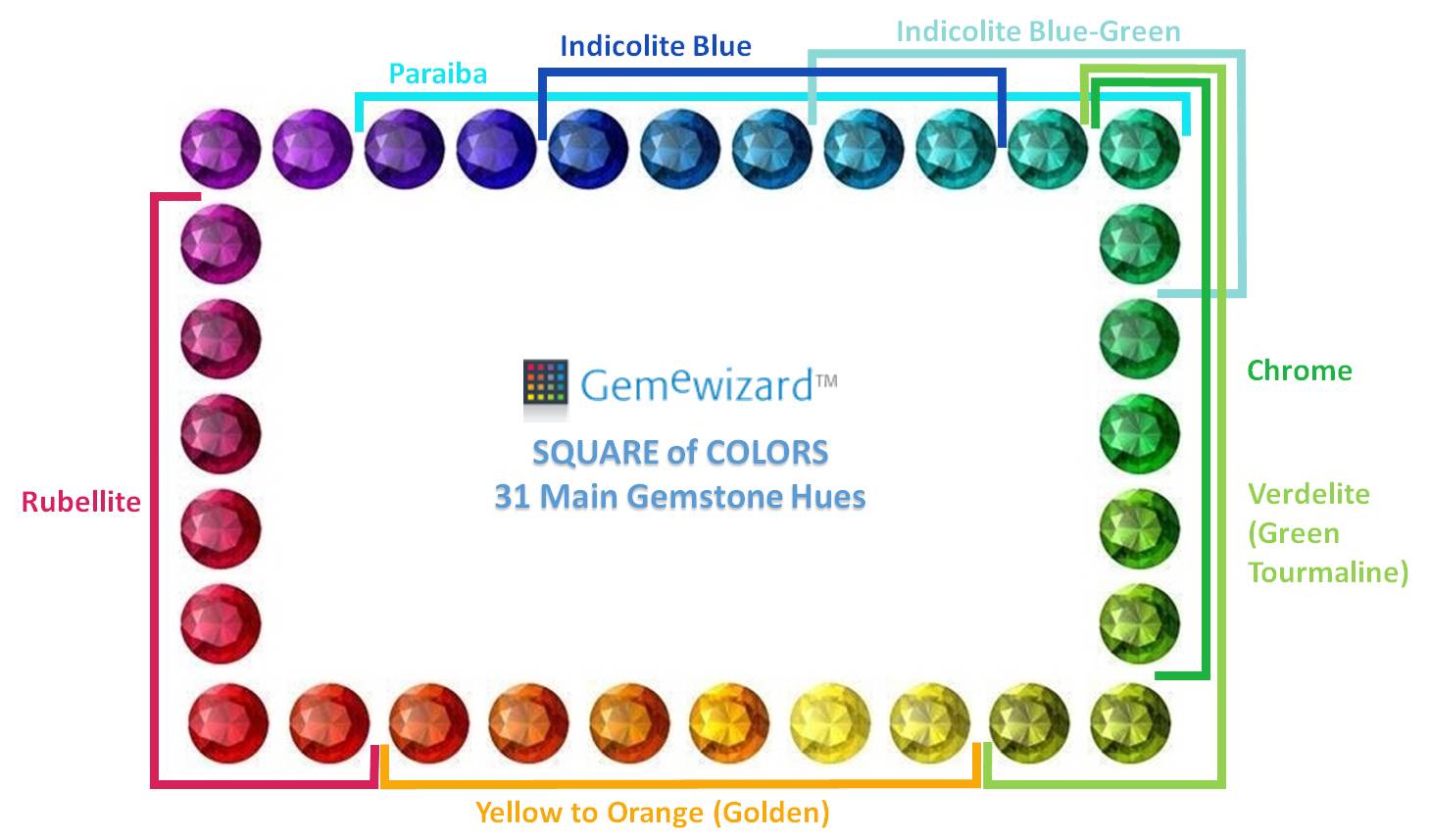 Rubellite colors range from reddish Purple to Red to Red-Orange. Some practices in the trade would consider defining gemstones as rubellite only if they do not display any color shifting under fluorescent and incandescent light sources. Others base their definition on the gem's color intensity, where dull red or pink colors do not qualify.

Paraiba is a Copper- and Manganese-bearing variety of tourmaline, displaying light-toned vividly-saturated greenish-Blue shade. Paraiba tourmaline colors range from very strongly bluish Green to violetish Blue with low tone and high saturation. They were first discovered in the Jose da Batalha mine in the State of Paraiba, Brazil, hence their name. Their unique colors are not found in any other gemstone in the world, therefore they continue to fetch the highest prices recorded for tourmalines of any color.

New sources for Paraiba tourmaline were located also in Nigeria and Mozambique. These sources are known for producing usually more greenish colors, some of which are attained as a result of a heat‑treatment process.

Indicolite is rather rare and resembles a synthetic blue sapphire. Indicolite colors range from very strongly greenish Blue to Blue with medium to dark tone. At first, despite its attractive color, indicolite had not succeeded in capturing a place for itself in the trade, and was rarely set in jewelry. In recent years, however, indicolite gems have become a hot alternative for Pariaba, possessing the closest color (albeit darker) at a more affordable price.

Golden tourmaline, also known as Savannah Tourmaline, is found in Kenya and Tanzania. Although these tourmalines are colored by Chromium, they produce different colors from the Chrome tourmaline. They have a unique pleochroism effect where golden to red and green are clearly visible. The colors usually range from orangey Yellow to greenish Yellow.

Multi-color tourmalines are tourmalines of the Elbaite species that contain two or more colors displayed in one crystal. This occurs when different minerals are absorbed during the crystal’s growth. Minor changes in the composition cause different colors to appear. Sometimes the shades would vary only slightly, whilst at other times the colors would be completely different, appearing in distinct color zones. Tourmalines with two colors are termed bi-color tourmalines, three colors – tri-color tourmalines, etc. Green and pink colors are the most common color combination.

Watermelon tourmalines are pink in the center and green around on the outside, resembling the colors of a watermelon. They are of the Elbaite species. Its colors were formed when the tourmaline crystal was exposed to different minerals during its growth, such as manganese and lithium, changing the crystal’s color from pink in the center to a pale-ringed zone to the green outer layer.

The main sources for watermelon tourmalines are Brazil, Nigeria, Madagascar and the United States.

Tourmaline gems contain a large quantity of tubes arranged in a parallel manner, causing the gemstone to display the cat's eye effect on the top of a cabochon. Tourmalines with this effect are very common and it lacks the sharpness and beauty seen in chrysoberyl.

Tourmaline is found almost all over the world.

Brazil - Brazil is one of the most major sources and almost every color of tourmaline can be found there. The main mines are located Minas Gerais and Bahia. Paraíba became a major source in 1989, when miners discovered a unique and intense blue to blue-green variety of tourmaline, later known as paraiba tourmaline. Much of the paraiba tourmaline from Brazil actually comes from the neighboring state of Rio Grande do Norte, which is often somewhat less intense in color.

Afghanistan – Afghanistan is known for its fine green verdelite and rare blue indicolite. Indicolite, verdelite, achroite and rubellite are found in the Nuristan region and Pech Valley of Kunar province. Afghan Tourmalines have an astonishing array of colors. The crystals display various shades of pink, blue, green, and multi-colored.

United States – Tourmaline is the national gemstone for the United States. The US was the main producer of gem tourmaline until the early 1900s, with major deposits in Maine and California. Tourmaline from Maine, first discovered in 1822, tend to produce crystals in raspberry pink-red as well as minty greens, while the California deposits are known for bright pinks, as well as bicolors.

Nigeria – Copper-bearing blue paraiba tourmaline was discovered in Nigeria in the late 1990s. The colors are generally paler and less saturated than the Brazilian paraiba tourmalines, although much less included. Additionally, yellow canary tourmaline is also found here.

Mozambique – After the discovery in Nigeria, another deposit of a copper-bearing paraiba tourmaline was discovered in Mozambique. The paraiba colors here are usually more intense than those of the Nigerian stones, and overlap in color and clarity with the Brazilian variety, especially with the ones produced from Rio Grande do Norte. The Mozambique paraiba is often less included and has been found in larger sizes.

Tanzania – Tanzania is known for its fine quality chrome dravite tourmalines. Additionally, in the past decade or so, substantial quantities of fine quality rough tourmaline in earth tone colors have been produced, ranging from reddish orange to brown to yellow and green, belonging to the uvite-dravite series.

Tourmaline is highly pleochroic. Different colors or color intensities may be observed when viewed from different angles.
Tourmaline is both pyroelectric and piezoelectric. If a specimen is put under pressure or temperature change, it will generate an electrical charge.
Additionally, some tourmaline varieties or series, for example schorl and indicolite, display a susceptibility to magnetism, possibly due to the inclusion of iron or manganese in them. ACCREDITED ETHICAL MEMBER We are very honored to