Emerald is a variety of beryl, a beryllium aluminum cyclosilicate mineral (Be3Al2(SiO3)6), occurring in various shades of green and is one of the most valuable stones found in nature. 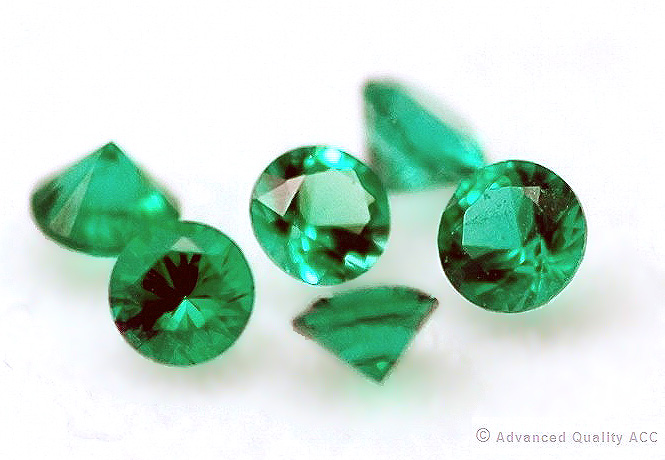 Emerald is the birthstone for the month of May and the gemstone representing the 20th, 35th, and 55th wedding anniversaries.

From the very dawn of history, it has been coveted and worshipped.

Emeralds were once prescribed for eye diseases and were attributed to improve weak eyesight because the green color was believed to be soothing to the eyes. It was also once recommended as an amulet to ward off epilepsy in children. Emeralds were known to strengthen the owner's memory, quicken intelligence, and assist in predicting the future, and also known as a symbol of rebirth and romance.

Emerald was credited with amazing powers against wickedness and deceit, and was even thought to be capable of blinding and killing snakes.

The Emperor Nero contributed to its legend by claiming that an emerald crystal had improved his powers of discrimination during gladiator battles.

Pliny, the renowned first century traveler and explorer, in his book from 77 A.D. on natural sciences, described the characteristics of gemstones. "The third most important stone in existence, for many reasons, is the smaragdus (emerald)," he wrote. "No other stone has a color more pleasing to the human eye." (Pliny assigned first place to the diamond, and second place to the pearl.)

The green color in beryl is caused by Chromium and/or Vanadium. Some old practices limit the definition of emerald to the chromium-bearing green varieties only, while the majority of traders define it according to the intensity of the color, regardless of its coloring element.

The colors of emerald range from yellowish-Green (11) to Green-Blue (18). The less saturated green-colored gems, however, are defined as Green Beryls, which have a much lower value.

When a gem's color falls into the border between the two variety definitions, such as when a beryl gem possesses a very light green color, which cannot be considered as ‘an obvious dominant shade’, or when a secondary hue distinctly influences the overall appearance, these borders become vague. Actually, the border between emerald and green beryl is highly subjective and differs between sellers. For example, one seller may consider a light green-colored beryl gem as an emerald, while in the eyes of another seller specializing in high-end goods, it will remain a green beryl. 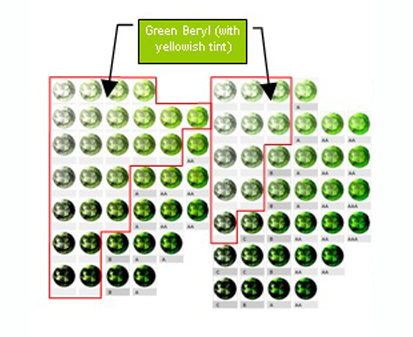 The oldest known source of emeralds is the Cleopatra Mine in ancient Egypt, located on the Red Sea. These mines were the source of all the emeralds that appeared in the ancient world. Emeralds were considered as a required item for the long journey to the afterlife.

Emeralds of varying quality were also discovered in the ruins of Pompeii, following the eruption of Mt. Vesuvius.

Another ancient mine which was already in existence during Roman times is the Habachtal Mine in the Austrian Alps.

Other ancient sources of emeralds are mines in India, the most famous of the known locations is the Ajmer Merwara Mine.

Columbia - Emeralds from the Colombian mines were used for ceremonial and decorative purposes for centuries by the indigenous population. The conquistadors learned of the gemstones' existence in 1537, after the naive tribesmen offered them up as gifts.

In Columbia today, there are two principal mining regions. The first is the Muzo area, located about 113 km from the capital Bogota, and the second is the Chivor region, which lies about 80 km northeast of the city. Both areas include several large emerald-producing mines.

Brazil - A number of emerald mines were discovered in Bahia state in Brazil. In addition, there are mines in the states of Minas Gerais and Goias. In 1963, the Carnaiba mountains were also found to yield high-quality stones.

Russia - Most of the known Russian emerald-producing mines are concentrated in the Ural Mountains, within 100 km from the city of Sverdlovsk. The most famous mine is the Takowaya, which was discovered in 1830, 45 km from the city.

South Africa - South Africa was the first country in Africa in which emeralds were discovered in the Northeastern Transvaal.

Zimbabwe - The best-known emeralds from Zimbabwe are the mines of the Sandawana valley, which yield beautiful stones that have acquired a place of honor among the most valuable of emeralds. Other mines are in Fort Victoria, the Filabushi region, the Balgoi region, the Bastari region and in Makanga.

Zambia - Zambia is, without a doubt one of the most important sources of emeralds. The mines are located in northern Zambia, between the city of Kitwe and the city of Ndola. The largest and most important of the Zambian mines is the Kamakanga mine.

Afghanistan - Emeralds from Afghanistan are renowned, among dealers and jewelers alike, for their fine-quality color, which equals the finest emeralds from Muzo in Colombia and Kamakanga in Zambia. The mines are located in the Panjshir valley.

Pakistan - Emeralds from Pakistan are concentrated in the Swat District. Four main deposits are known to produce gem-quality emeralds: the Mingora deposit, the Gujar Killi, and the Barang and Khaltaro deposits.